James Henry “Jimmy” Van Alen was a good tennis player, and also “court or “real” tennis (the precursor to lawn tennis) ancestor – national champion1. He was born and had always lived in Newport, the birthplace of American tennis and a holiday resort of the rich. He eventually turned the US Championships’ old site into the “Tennis Hall of Fame”. However his love for tennis and the history of the game didn’t stop him from being remembered as a great innovator and reformer. 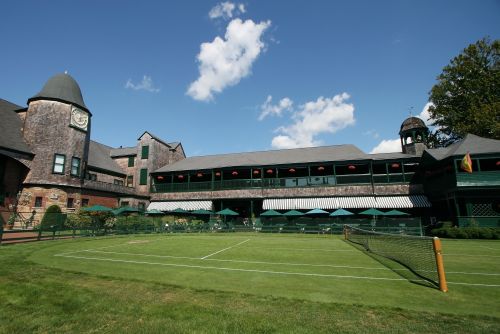 Eventually, Jimmy decided that there must be a way to put an end to those matches which went on forever , starting with “his” tournament’s final. Newport 1954: he was watching the singles’ final and was eager – just like the rest of the audience – to see the doubles’ final between the great Australian champions, Neale Fraser, Rex Hartwig, Lew Hoad and Ken Rosewall. The two singles’ finalists, the Americans Ham Richardson and Straight Clark, didn’t really seem to want to end their match: it took them 83 games and more than four hours for Ham to put an end to the long wait (6-3/9-7/12-14/6-8/10-8). Because of this match’s unexpected length, the promoters were forced to move the doubles’ final to an outside court2. That was too much: something needed to be done! And so, tests were started.

He decided to change the scoring system. In order to make tennis matches easier to schedule, he created the Van Alen Streamlined Scoring System, aka VASSS. There were many rules, among them: the use of cardinal numbers (1, 2, 3…) instead of the usual 15, 30, 40; game point at 3-3 and the abolition of deuce. He used a scoring system like table tennis, with sets won at 21 or 31 points, five services each and no second service. In 1955 and in 1956 these rules were applied in two U.S. pro Championships, both won by Gonzalez.

Later on, a new rule was applied: the tie-break had to be played best of 9 points (“sudden-death”), with the winner being the first to score 5 points.

In 1965, in order to promote his ideas, in Van Alen sponsored the “Casino Pro Championship”, paying a huge sum of prize money (10.000 dollars) and hiring the best professionals of the time: among them Laver, Hoad, Rosewall, Gonzalez and many others.

In 1970, Bill Talbert, then the U.S. Open director, decided to adopt the “sudden-death” tie-break. It was the first time in a Slam tournament, and the players complained because of the excessive stress. Both players could have a match point simultaneously, and the old rule prevented a player from losing the match without losing his service at least once could possibily be broken. Many players signed a petition but Talbert laughed: “Of course they’ll be nervous but the fans will love it. Did you ever know a player who bought a ticket?”

Up until 1976, a red flag was shown when a tie-break was played at the U.S: Open. This signalled the novelty of the scoring system and attracted other people from nearby courts.

So the tie-break was successful and was adopted by the other Slams: Wimbledon and the Australian Open in 1971 and Roland Garros in 1973 but the version used today is the one called “lingering death” (best of 12 points, whit an advantage of at least 2 points). The Americans too turned to this format in 1975. However, even today the U.S. Open is the only Slam where the tie-break is played in the fifth set.

This new idea saved the tournaments promoters, thanks to shorter matches and easier rescheduling in bad weather. Indoor tournaments where there are not many courts also greatly benefited from the tie-break. Of course, a pivotal role was also played by TV networks and their scheduling problems.

Even traditionalists can’t escape the fascination of some tie-breaks, for example, the ones that have left a mark on tennis’ history: among them the legendary 18-16 by McEnroe against Borg in the fourth set of the 1980 Wimbledon final, even though it was the Swedish who eventually won the match. It was that game which began the legendary rivalry between the two men, even inspiring books such as “Borg vs McEnroe” by Malcom Folley.

And what would have happened in the match between Ken Rosewall and Rod Laver in the 1972 WCT final, in Dallas, without the ultimate tie-break? Or in the match won by Sampras against Boris Becker in the 1996 Masters final, at Hannover?

And what about the unforgettable battle, the “perfect match” in the quarter-finals of 2001 US Open, when Pete Sampras defeated Andre Agassi 6-7 7-6 7-6 7-6 ? Without the tie-break rule the match could never have been so fascinating and moreover… the score would still be 24 all in the first set.

1 Court tennis was played indoor, in a hall 30m long and 12m wide; the net was high 0,92m in the middle and 1,5m on the sides.
2 It seems strange that a doubles’ final could be more interesting than a singles’; but at that time all the best players habitually competed in doubles.

Iscriviti a questo blog per ricevere i post più recenti.